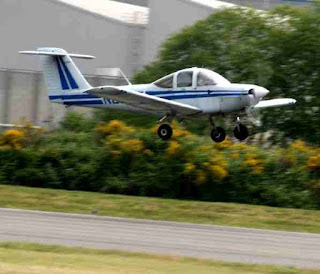 Almost 30 years ago, I dreamt of learning to fly. I even took an initial step with a flight lesson at the local airport in New Knoxville, Ohio. However, before I could get good and started on the flying, life intervened and a more pressing need for potential flight training funds caught my attention. The dream didn’t go away but rather it went on hold.

About 7 years later, I re-took that initial step at an airport in the Kettering, Ohio area. However, once again life put flying on hold as at about the same time, we learned our first son was due in the coming months. This time the dream was parked but still not forgotten.

Fast forward 20 some years and here we are buying a house outside of Seattle, Washington that has a view of the Renton Municipal airport from afar. For several months, I’d sit on the deck and watch, through my binoculars, the small airplanes coming and going and practicing their touch and go’s. As a bonus, the end of Renton’s Runway 33 flows right into the waters of Lake Washington and so I could also watch Seaplanes departing with a roar and splashing down in that graceful combination of flying and boating with speed to boot.

So it was that exactly one year ago on Memorial Day weekend 2006, that I took advantage of the day off from work and headed to AcuWings at Renton Airport. In no time at all, that first lesson was under my belt for the third time. And this time it stuck!

While the business of life and hectic work travel schedules clawed at my time, over the course of this past year, I managed to build up enough flying time to solo on my own this Memorial Day 2007.

Perhaps it is as the old saying goes, “the third time is the charm” or maybe it’s just that persistence really does pay off, either way, I’m happy to say that achieving the milestone of solo flight is one big thrill on my way to learning to fly.

Check out photos of the Piper Tomahawk I flew in my first solo effort by CLICKING HERE. Special thanks to my Aircraft Owner’s & Pilot’s Association volunteer mentor Wade H. who just happened to be at the airport with camera in hand when I took to the air.