A hot topic, at the 2014 Consumer Electronics Show (CES), was the world of 2nd Screen applications.  These applications running on phones, tablets, and PC’s, revolve around TV everywhere, social TV, over the top services, multi-screens, and interactive television.

As exciting as it all is, the 2nd Screen world has not yet delivered to its potential as to consumer pleasure.  2nd Screen applications sit at the very intersection of three key trends from CES 2014; Wearables, Contextual Computing, and the Internet of Everything.

Embracing this highly coveted industry intersection, and making the location work for the consumer by putting them in the center of it all, is the key to unlocking the 2nd Screen’s long-term value.  So, what does the 2nd Screen neighborhood look like?
Sitting right in the middle of this big intersection, should mean the 2nd Screen world sits in a prime real estate neighborhood when it comes to business appreciation potential.  However, while 2nd Screen players have generated lots of buzz and some very individually interesting applications, especially in the field of sports and special events where Major League Baseball, The Grammys, and Victoria Secrets have all produced applications that have attracted much ado, the overall 2nd Screen experience is still lacking at the everyday consumer level.

There is no doubt that we have become a population of multi-taskers even when watching TV, as upwards of 75% of us use other devices (phones, PCs, tablets, etc.) while watching television.  What’s missing in the midst of all this activity and for which 2nd Screen is ideally positioned to provide, is a definitive, seamless, and integrated experience to make consumers smile with pleasure whenever they are in the embrace of the 2nd Screen world.

Why should consumers have to go in and out of different apps as the TV show changes?
What opportunities to serve the consumers and thus the 2nd Screen business world are being missed by the disjointed, one-off application approach requiring new individual apps which the consumer must learn about, find, install, and open … all at the appropriately relevant point in time?

In the early days of 2nd Screen, such a one-off application based approach was just fine.

However, as the industry matures, especially in light of its location among the Wearables, Contextual Computing, and the Internet of Everything neighborhood, the 2nd Screen world needs to lift the target and re-aim its innovation efforts.

What if, a 2nd Screen app served more as your personal TV butler, concierge, or daresay a mother, to guide you forward with answers to your every question always at the ready.  “Where was that scene shot?  Who is that actor? What story line does that reference? Where can I buy that?  What’s on next?”  All of these perfectly valid questions and more can be served by the 2nd Screen world.  Unfortunately, as of today, each question requires its own application which needs to be ready and open to deliver such answers.

It is time for the 2nd Screen world to deliver a truly integrated solution as opposed to a silo’ed world of ever more one-off applications.  As we approach the 200 millionth connected TV mark, the 2nd Screen world should embrace this challenge and enable a seamlessly flowing user experience for multi-tasking consumers.

As Bob O’Donnel of Techpinions.com wrote recently, “we live in a multi-device, multi-platform world”.   Get over it.  Yes, it is easier to concentrate on a single device or a single platform strategy and grow a company with a one-off application, and in the early days, it is often the best way to grow.  However, a real consumer pleasure provider (and therefore lucrative business opportunity) resides in the 2nd Screen application that can pull all these realities together and serve the consumers in the integrated, seamless manner they desire.

Put the consumer at the center of the 2nd Screen intersection of Wearables, Contextual Computing, and The Internet of Everything and thrive.

PS  See www.2ndscreensociety.com for more on the exciting field of 2nd Screen applications and abilities.

One of the greatest pleasures at the Consumer Electronics Show (CES) 2014 turned out to be the “Eureka” zone.  This area of the exhibition, located in The Venetian, was dedicated to showcasing new start-ups with gadgets and ideas just emerging onto the scene.

Of course, CES is always chock full of excitement.  However, the raw energy, enthusiasm, and innovation bubbling out of the little Eureka zone was of a different quality; passionate, raw, none of the jaded “been there, done that” attitude that tends to creep up on CES veterans.  At the Eureka zone, innovators and inventors showcased their wares and spoke to nearly anyone who would listen of their solution to a market problem they have solved and their raw passion for getting it to market.  It was simply and joyously infectious.

Three examples might illustrate a tad of the Eureka zone’s innovation and promise: 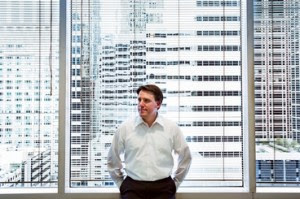 In other words, put your free hand in your pocket, use it to hold another device, or better yet, use it to hold somebody’s hand.  With Handscape’s innovation, you can operate with just one-hand your chosen device with ease.  Of course, it also means you can two hand type on the back of your device without having to prop your tablet on a table or your lap.  Looking to be in market by year end, this is a clever innovation you will definitely want to try out when available.


Yes, the Eureka exhibition space at CES was a smashing success, both from the perspective of the innovations showcased and for the sheer unbridled passion and fun the innovators and inventors participating brought to life in person.  At CES 2015, Eureka will be a top-of-the-list spot to visit.  Long live Innovation, Invention, and Passion.

Automobiles deploying electronics technology were a big part of Consumer Electronics Show (CES) 2014.  This is not necessarily a new CES trend, although in past years, it has been more about what aftermarket technology could be installed into a car; audio systems, TV screens, security systems, etc.  This year however, major announcements from largely German auto manufacturers showcased how the automobile is embracing the consumers’ app-ified, always connected, world.

One particular example stood out as “an interesting but not yet really ready for prime time” example; the parking lot demonstration by Audi of their self-parking automobile technology.  Finding a parking spot in a crowded lot, one that you know the car will fit in, and the process of carefully maneuvering into it, is certainly not the most pleasurable part of the automobile experience.  Thus, applying technology to make this more enjoyable for the driver is a valid thought.  However, in this case, the cure may be worse than the ailment.

When the tricked-out Audi and driver enter a parking lot, the driver tells the car to find a spot to park.  The Audi will then obediently find a spot that will accommodate it and stop so the driver can disembark.

However, the driver cannot simply run off to their meeting, shopping, or restaurant date. 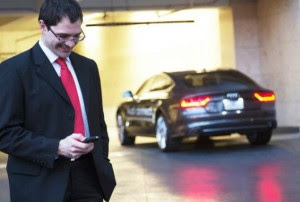 Rather, they must remain nearby and watch the car perform its magic to ensure safety and success for all.  Yes, to enjoy this technology, the driver, who is now standing outside of the car and likely thankful it is not raining, snowing, blowing, or just plain cold outside, must pull their phone out of their pocket or purse, fire up the Audi app, and then press the button to tell the car to go ahead and park itself.  Now can the driver run off to their destination?

No, not quite.  The driver now needs to continue to hold the button on the Audi app on their smartphone being ever vigilant as the car maneuvers back and forth into the parking spot.  Taking a finger off the app’s button will instantly stop the car in its tracks.  It really is sort of magical how the car can move unguided with such precision and instantly stop with the touch of a finger.  However, the driver is likely to grow rather weary of holding the blasted button on the app, on their smart phone, throughout the whole process.

At CES 2014, such technological examples garnered the appropriate “ooo’s and ahhh’s” but at least in Audi’s case, practicality needs to come to the forefront before the “price” of self-parking can be paid by self-parking technology, an app, a button, and the driver’s finger.