Yuneec With a Passion For Flying

One of the surprises at this year's Consumer Electronics Show (CES) was the airplane I found in the parking lot of the Las Vegas Convention Center. Being one of those folks who have to look skyward anytime an airplane flies overhead, spying an airplane sitting in an automobile parking lot pretty much guarantees I will stroll over to see what might be learned.  As it turns out, this particular airplane was parked in the parking lot show booth of Yuneec Aviation Technology. 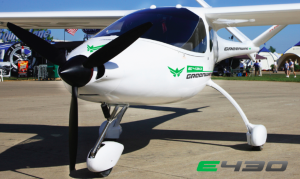 Parent company Yuneec International (www.yuneec.com) is a leader in developing and manufacturing electric propulsion systems for planes and other personal transport systems.  The airplane in the parking lot was Yuneec’s all electric, light-sport-aircraft (LSA), two-seat flyer.  Cool!

As I was admiring the sleek lightweight looking lines of the new airplane, one of the booth personnel strolled over and asked if I had any questions. With an opening like that, how could I resist?  And so, I began quizzing the young man about the performance factors of the airplane. To my pleasant surprise, I quickly learned I was actually speaking with, not your ordinary CES booth worker, but rather the test pilot himself.

Full of energy and of course a passion for flying, this gentleman wanted to tell me everything possible about the airplane’s impressive accomplishments. In rapid fire order, I learned that the Yuneec GW430 airplane can haul a max weight of 1,041 pounds skyward, cruise at 100 MPH (max), glide with a 24:1 ratio and land at a stall speed of just 40 MPH.  The all-electric motor cranked out 64 horsepower, weighed just 42 pounds and could recharge in 3-5 hours on 110 or 240 volt supplies.

Given a max flight time of just about 90 minutes before needing to return to the charger, I suggested that the flight to recharge cycle time was a little long.  My comment merely elicited a big smile and a full explanation of how the battery pack was designed to just drop down for disconnection so another fully charged battery pack could be bolted right in taking no more time than a typical refueling effort.  Thus, the test pilot explained that one airplane and maybe two spare batteries could easily serve as the perfect training choice for most flight school situations.  No gas costs and none of the typical gasoline engine related operating costs sure seem to be great advantages Yuneec can win in the market with.

Yuneec aircraft is in their final stages of test flight at this point and looking to be in manufacturing and on sale later in 2014 with decisions being made now as to how come to go-tomarket, at what price, via what distribution means, etc.

With International corporate headquarters in Hong Kong, this particular test pilot and airplane were stationed in the Los Angeles area where my new found friend reported his only issue was the desire for more and more flight time (who among us has not murmured something similar!).

As my appetite for information about the Yuneec airplane was satiated, I began to wonder why, even though the product is an innovative and all electrical design, a company would take a booth with all the related expense to be at CES where they were the only airplane in the parking lot of the show.

That's about when I noticed the all-electric, motorized skateboards that were whizzing back-and-forth just outside of the aircraft's parking perimeter.  Also from Yuneec, the E-GO motorized skateboard was carrying folks up to 200 pounds at speeds up to 12.5 MPH with a range of about 3 hours’ time. While there were a few CES show goers who might have been better as crash test dummies, most of them took to the E-GO  skateboard with ease and with very big smiles and lots of laughter; a good sign for the company Yuneec. And while this year, skateboards were the only Yuneec product open to the show-goer for demo rolls, maybe next year, show-goers will be able to line up for demo flights in new GW430 aircraft. One can only hope!

I shook hands with the friendly test pilot, wished him and the company well, smiled again at the motorized skateboard fans zipping back and forth, and then wandered my way back inside the Consumer Electronics Show to see what surprise might yet be in the wings.