BendixKing “On Course” & The I-E-E-O Checklist

Checklists are simply a fact of life in the aviation world.  Why then does the industry forget the power of the checklist when creating advertisements to inform us of new technologies to buy?  The I-E-E-O (Interrupt, Engage, Educate, and Offer) Checklist as illustrated in this example from BendixKing and their recent “On Course” advertisement clearly highlights the value of the checklist for improving advertisements. 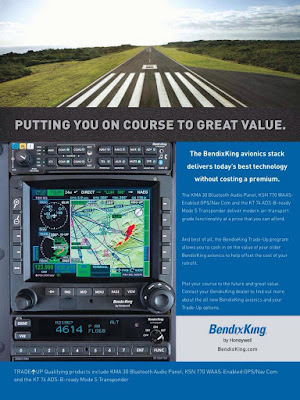 The BendixKing “On Course” advertisement uses dual beauty shots of a runaway and product to interrupt the reader.  It’s not a bad idea as most any pilot would likely be drawn into the threshold crossing view of the runway.  However, the eye will naturally want to look down the runway (can’t you just hear your earliest instructor telling you to do that?) and thus the eye fights to look away from the meat of the advertisement.  If your gaze heads to the end of the runway, the next natural step is to fly off the page and onto something else entirely.

Just as a checklist may requires a double review of a critical task, this advertisement tries to counter the wandering eye tendency by making sure the second beauty shot, the product, is large and crisply rendered (though the image on the display doesn’t directly support the image at the threshold).  This attention battle leaves the reader in a tug of war between allowing their eye to flow down the runway and off to the next page, versus zeroing in on the eye-candy of the product itself.  The approach works in the end, but it is far better if the interrupt stage of an advertisement does not initiate such a conflict.

As to the engage stage of the I-E-E-O checklist, the “On Course” advertisement promises to educate about “value … without costing a premium”.  In fact, of the four text blocks in the advertisement, the cost/value point is hit upon at least once in each block.  However, not one shred of evidence is offered to back up the promise.  The advertiser crossed off the checklist item but never realized what was missing.

So, even if the idea of value and cost savings served to engage the reader, the education phase of the advertisement totally drops the ball by not offering proof points to back up the claims.  Ironically, two very strong points to build the information around already exist in the advertisement at some level; the BendixKing legacy with its near omnipresence position in so many planes and the hinted at trade-up program.  These two features enable strong and unique ways to leverage the BendixKing legacy into new sales.  Unfortunately, no meaningful details are exposed for the interested reader who might be thinking about and wanting to trade-up, except of course for the bottom line print that suggests the restrictions and limitations.  Such a missed opportunity!

As to the Offer stage of the I-E-E-O checklist, while the “On Course” advertisement suggests the reader contact a BendixKing dealer, there’s no suggestion as to how best to do that or where to find a dealer.  Yes, there is a web address below the company logo but that is a pretty weak offer for a message that has such potential.

In summary, the BendixKing “On Course” advertisement is a bit of a missed opportunity.  It starts with dueling Interrupters, begins to engage but then fails to deliver a real education as to the advantage of working with BendixKing. Finally, it misses the landing and forces a go-around by not having a clear and compelling, low-risk next step offer for the reader to take.
One last point, while all pilots possess excellent eye-sight (without a doubt), the reality is that white/grey text on a blue background should be avoided as a general advertising design element.  Young advertising designers tend to love the look.  Older buyers simply cannot easily see such text.

Greg Gudorf is an avid pilot and experienced technologist/marketer based in San Diego, California.  As the founder of The Gudorf Group, Inc. (g2speaks.com) Greg works with Start-Ups, Innovators, and Re-Starts to strategize, build, and bring to market hardware, software, and service-based solutions for the real world.  Learn more with an e-mail to success@gudorf.net.