Overnight On The USS Carl Vinson 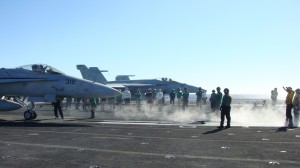 The rushing sound of steam building to pressure, the straining roar of jet engines at full throttle, and then, the clang of the catapult hurling it all skyward within 2 blinks of an eye, makes for the short summary of my recent Embark Tour of the USS Carl Vinson at sea, 120 miles off the coast of San Diego in April, 2014.

As a tiny plane (mostly 172 and Piper) pilot, the thrill of being on the flight deck of a nuclear powered aircraft carrier was quite simply, a boyhood dream come true.  However, it took all of my 54 years of supposed maturity to stand in apparent calm, just feet from the wingtips of the beautiful F/A-18 fighters, as they thundered off the short deck and into the air under full military power.  What I wanted to do was whoop, holler, and jump for joy as an eye-witness to an event I had only previously seen in magazines, movies, and my own imagination.  My bones and the fillings in my teeth were rattled time and again as I watched the dance of the catapult and the jet in full opposition and concordance, as jet after jet took to the sky. 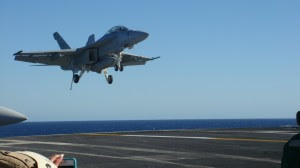 My excitement however, melded into pure admiration for the flying skills required as we moved aft into the landing area and watched pilot after pilot, slide down short final and catch (or occasionally not) an arresting wire trapping all their machine’s fury within just several hundred feet.  What a treat.

Slowly, as my mind and my eyes started to settle into the rhythm of the deck sway and the jets coming and going, I began to notice and then pay particular attention to the human fury going on all around as young sailors swarmed the planes on both launch and recovery; preparing, coaxing, and guiding man and machine through the carrier qualification exercises I was observing.  So much activity and such teamwork was a truly an awesome sight to witness. 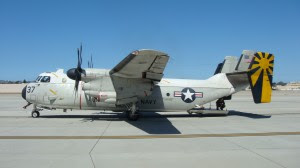 Later as our small group moved throughout the USS Carl Vinson, touring areas of the ship that some of her younger inhabitants had likely not yet seen, that same impression of immense activity and strong teamwork was displayed at every turn.  In fact, I quickly realized that from the briefing at North Island Naval Air Station, before we even boarded the C-2 Greyhound for our flight to the carrier, (my first trap landing and I have the patch to prove it) strong teamwork was the norm.

Seeing the eyes of young sailors light up with true, heartfelt pride as they answered questions explaining various processes and efforts they each contribute to the carrier’s mission and success, made you realize what a profound and positive impact the Navy has on these young people. At the same time, exactly how dependent the Navy’s ongoing success relies on 18-22 year old sailors was also very apparent.

On board, under the guidance of Commanding Officer Captain Kent Whalen, Executive Officer Captain Walter Slaughter, and Command Master Chief Jeffrey Pickering, the crew allowed us to view tasks in action throughout most of the ship. The sheer variety and complexity of life on-board was really something to witness firsthand.  Read all you want (and I try) but seeing things first hand was just powerfully inspiring. 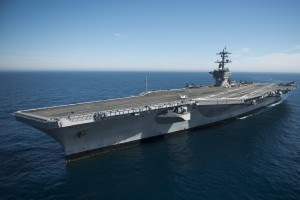 Beyond a renewed sense of gratitude for all members of the military who willingly tackle such difficult work, an even bigger takeaway was a much more clear understanding as to the need to properly and continually fund our military.  As a country, once we decide to field military assets and task them with projecting power, providing defense, and even emergency humanitarian aid, we owe the very real people on-board as well as those supporting the endeavor, every point of advantage needed to deliver on our goals.  Anything less is simply shameful; especially when the lack of support is due to budgetary gamesmanship as an offshoot of our current political process.

I am extremely grateful for this opportunity, which came via my recent membership in the San Diego Navy League, and I offer my sincere thanks to the USS Carl Vinson officers and staff for a truly eye-opening experience.

As the USS Carl Vinson continues preparation for an upcoming deployment, my thoughts, prayers, and best wishes go with them for success. Godspeed!

View more pictures from G2 here and from the Navy here.