Dieting? Forget About it...

Here's hoping your New Year is off to a roaring start!

New Years and the requisite talk of resolutions, always seems to come around to the reminder that some of us should do more dieting. I know I could stand to lose 3-5 pounds (or 30-50 pounds as my wife might suggest).

However, this New Years, when I found myself thinking about dieting, the thought quickly flitted away and was replaced with grand memories of meals; meals filled with fun and friends, both old and new.

Today, I hope to convince you to forget about dieting in 2016 and instead concentrate on all
the fun memories you could be building in the name of food.

One of my early such memories dates back to being a teenager in the farmland of Ohio. My buddy and I are out on a date, well it’s my buddy and I and two girls on a double date. 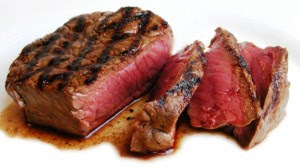 We set out for a rather fancy steakhouse (I’m not talking Sizzler) in the nearest big city. The four of us are chatting away when the waitress comes by to take our orders. The girls place their orders first and then my buddy says,  “and I'll have a well-done fill-it-mig-non steak. Instantly, there was a very pregnant pause in the conversation, into which I boldly step forth to fill the void by saying, “yeah, make mine the same please”.

The waitress could barely contain herself and there was a quiet giggle from the two girls we were so much wanting to impress. However, the evening proceeded marvelously. It wasn't until much later that our faux pas referring to the king of steaks as a fill-it-mig-non was brought to our attention by those same girls (they still become our wives so go figure). Nowadays, I prefer my filet mignon medium-rare, thank you very much.

Another memorable meal occurred as I was first starting to travel internationally on business. I was headed to the Middle East; first stop Cairo. And so, I did my homework as to cultural issues trying to make sure that a faux pas, similar to what I just shared, wouldn’t happen in the context of a business meeting dinner.

One of the things my research turned up was how Arabs regard the left hand; the unclean hand for rather obvious personal hygiene reasons. However I was born a left-handed eater.
At a first dinner arranged by my customer at a fancy restaurant in Cairo, I tried my best to eat with my right hand. If you've ever wondered what it's like to try to eat opposite handed, well, it’s a painful and potentially messy proposition.

About 15 minutes into the dinner, things were going smoothly enough on the business conversational front, though I was struggling mightily on the eating flank, when my host, starts to openly chuckle. Eventually, he pushes his sizable girth back from the table, looks me in the eye and says, “you don't normally eat with your right hand do you?”

I had no choice but to confess. I mean I was caught right-handed. He just chuckled further saying “have no fear - eat with your left - no one will worry”. Then there's another meal that comes to mind. I was in Dubai and dinner was a very flavorful and highly varied smorgasbord of things I’d never eaten before. At some point, I noticed that my host, a UAE-native and his partner from Pakistan were chatting over an obvious inside-joke. When the next dish came out, I also noticed it was only set in front of me. With a twinkle in their eyes, my hosts encouraged me to give it a try. Not wanting to argue with an otherwise gracious host, I tried two of the four pieces in the dish.

Now, honestly, they weren’t the tastiest thing I had ever eaten, but after they were safely down the hatch, I paused to look at my host and his partner who were grinning like two school kids who had just pulled off a world class prank. I raised my eyebrows and asked what it was that I had just eaten. Through their giggles, they explained that I had just eaten two goat testicles.

I grimaced but then decided to move on with a smile. I’d passed their little test and the evening turned out to be very enjoyable. Although, the next day, I did have to shave three times!

Then there was that time on my way home from a 15 day around the world business trip where my last stop was to be our office in Holland. The team there knew me well enough to know how much I enjoyed Mexican food.

As such, they announced with great pride on my arrival, that they had made reservations for the best (turns out, the only) Mexican restaurant in all of Holland for that evening. It turned out to be absolutely atrocious. Neither the Dutch nor I stomached it very well though we all soldiered on in relative silence.  That is until  about the third round of beers. About that time, the idea of good Mexican food existing in Holland became the funniest idea in the world. We shut the restaurant down that night, partly with the idea that it might stay shut forever.

Lastly, I'll share a memory from one of many memorable meals I enjoyed while traveling over the years in Japan. After 10 days on business in Tokyo, my wife and my youngest son, who was 12 at the time, joined me for a few days of sightseeing.

My son immediately took to the culture and the chopsticks and sashimi and sushi.  My wife, not so much. On our last day there, we decided to eat at the Friday's near the Shinagawa train station. 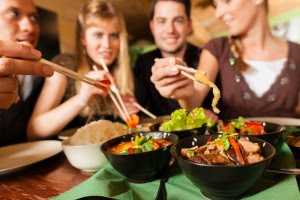 I don't recall what my son and I ordered that day but my wife ordered a big fresh salad which was promptly delivered to her at the exact same time the table of four Japanese women next to us had similar salads delivered.

My wife's smile broadened even more as she realized that instead of chopsticks, the salad was served with “real” silverware. As we tucked into our meals, a commotion arose at the table next to us; it turned out that none of the four Japanese women cared at all for the silverware and were demanding chopsticks for their salad.

Forget about dieting in 2016. Instead realize that each meal, and each gathering with others, is an opportunity to create a memory that you may recall fondly, maybe even with a chuckle, many years later.