It started like so many other ideas. Two long-time friends enjoying a pub dinner halfway through their first beer, one friend says to the other, “Wanna backpack the entire Smoky Mountains National Park using the Appalachian Trail? It's only about 75 miles.” The other friend finished his beer, set down the mug, and simply said “I'm in.”

That is how my Great Smoky Mountain adventure of last month came to be. Jeff and I have
been friends since high school and those two simple words, “I’m in”, led to what we told our wives would be a walk in the woods.

Now, if you've read the book, “A Walk in the Woods” by Bill Bryson which was made into a movie last year starring Robert Redford and Nick Nolte, I suppose Jeff might pass for Robert Redford, which means I must be the out of shape, overweight, cantankerous but lovable Nick Nolte. By the way, a friend who heard just the other day that we had successfully completed the trip said, “man, you must have gotten into great shape”. “Nah, I'm just a stubborn son-of-a-gun” was my reply.

Prepping for the trip meant lots of day hiking of ever increasing mileage here in San Diego. It also meant shopping for lots of new gear. The first thing I did was find a new backpack. To test it I loaded it with 40 pounds worth of bottled water. The only other piece of equipment I had purchased was a water filter designed to make almost any trail-side puddle drinkable. I thought it important to try this filter locally - you know, better to be sick from bad water at home then in the Smokies -  so, I decided to test the filter and the backpack on a stroll around Lake Hodges with my wife.

Now picture this, see the serenity of Lake Hodges in your mind’s eye. See a 50 some year old fat boy with a black and purple backpack (I chose the color to match any potential bruises). The pack is full of 40 pounds of perfectly good, fresh, clear water and yet, I’m on my knees with filter in hand collecting a quart of water from one of the green scum runoff creeks just off the trail.

My wife couldn't believe it. She had to take pictures to show the kids how stupid their Dad was being. However, after filtering that green scum water, it came out clear and it tasted great. Better yet, I didn't get sick. That’s how I came to know that I had a good backpack capable of carrying the weight and a portable solution for filtering water as needed. Shoot, I was almost good-to-go. 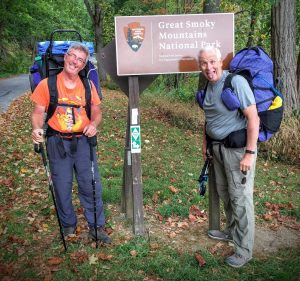 Soon enough, Jeff and I were departing for the south end of the Great Smoky Mountains National Park. The first day’s 11 miles or so is basically all uphill. On that first day, just about the time that you’re panting and sweating so hard you begin to wonder, whose brilliant idea this was, we came by three senior women resting and chatting trail side.  They had the grins of experience when they saw the size of our backpacks. After asking where we were headed, the oldest of the three smiled and said “y’all look like typical first timers. Bet the next time your packs will weigh more like 25 pounds instead of 40”. Jeff and I looked at each other with raised eyebrows, his backpack weighed in at 42 pounds and mine at 38 - we just shook our heads.

An hour later as we continued climbing up and up, the rain began falling down and down.  Since Jeff and I were already soaked through and through in sweat, we decided to only cover our packs and skip the rain gear for ourselves.  Which merely guaranteed that when we finally stumbled into the evening’s shelter at about 7:00 PM, it was near dark, we were soaked, and it was chilly. 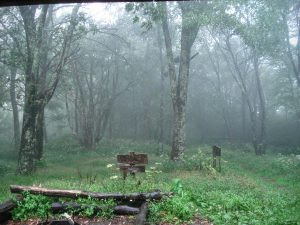 By the way, don’t let the word shelter fool you. This is not a nickname for a low-end suite at the Four Seasons without room service.  These shelters are spaced 7-12 miles apart on the AT within the park. They are three sided wooden structures with a roof that may or may not leak and a stacked bunk bed style platform designed to hold 12 or so sleeping hikers.  And yes, with just three sides, the fourth side is wide-open to the wilderness.

In order to discourage bears from snuggling up alongside sleeping hikers, the park requires that all odoriferous - love that word - items such as food, candies, toothpaste, etc. be hung a minimum of 15’ in the air from rope and cable systems you string from nearby trees.  The idea being that if there are no odoriferous items inside the open shelters, then bears will, generally speaking, leave you alone. After hanging our odoriferous stuff high in the still rain filled sky, I snuggled into my sleeping bag, drew in a deep, calming breath and nearly gagged on the odoriferous odor of 10 exhausted hikers and their wet gear hung in our shelter for the night. No bear in their right mind would snuggle with us that night. 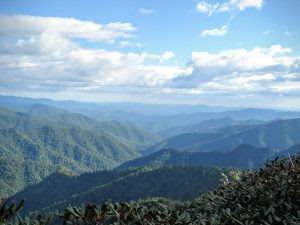 From the second day onward, the skies cleared and God's beauty that was always all around us became highly visible. Of course, that would imply that we had the energy to look up and out as opposed to downward watching one foot after the other step across roots, boulders, loose shale and the occasional mud hole as we trudged ever upward across Mt. Buckley, Collins, Clingman's Dome and eventually, a place called The Jump Off; which is about what I was ready to do by the time we got there.

Instead, I looked about and recognized a nearby viewpoint as a spot where my Dad and I had often hiked over the years, always stopping to admire the view. Given Dad's passing in June he was on my mind a lot as I hiked and so I stopped at our viewpoint near The Jump Off and spoke to his spirit, contemplating how I miss him, though secure in the thought that he is now at peace and free from Alzheimer's.  As I re-shouldered my pack and turned to hike ever upward and onward, a bright yellow butterfly fluttered across the vista and disappeared in the direction I was to head.  Yellow butterflies were one of Dad’s favorites in his last years. 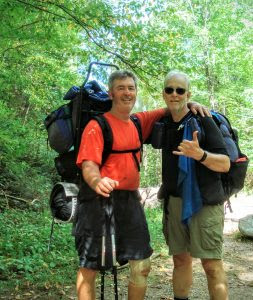 Jeff and I hiked onward. There are lots of tales and memories I could share as we covered the PUDS of the Smokies.  You know PUDS right? Pointless Ups and Downs.

We slipped off our packs, plopped down on a rock next to the road and smiled at one another.  An adventure among friends that began with a simple “I’m in” was now complete.  As luck would have it, a few minutes later, a couple rolled by in an SUV, saw us, stopped and the woman passenger hollered out in Southern-ease, “Well, bless your hearts. Y’all look beat.  Would you like an ice cold Gatorade?”

Hallelujah!
Posted by Greg at 5:28 PM